The day of turning the processor on, we had been waiting impatiently for this moment. We had been scheduled for all-day visit at Kajetany. All in all nothing special happened, meeting with the doctor, the one-hour presentation and ? the most interesting ? connecting the implant. June 10 2013

During the process nothing happened for some time, then after a few minutes, while the technician was tuning something up, Hela got tense, her eyes turned red and she started to cry. We’ve received four processor programs and we’re supposed to change them every week, then after a month we need to come back for more programs. Apparently Hela is going to start hearing only after 6-12 months. July 01 2013 Ever since Hela started wearing her implant we have been checking if she’s hearing something. We thought the effects would occur faster.. well, on the fourth program something has changed, we’ve noticed that when we clap, Hela’s turning :))) Great, there is some progress. I also believe she’s reacting and turning when I call her, but I am not 100% sure. I’m certain she reacts to clapping, the drum and Ala’s bell 🙂 We are waiting for further effects :))) Unfortunately she is rarely wearing hearing aid in her other ear, sometimes we don’t feel like putting it on her, sometimes we forget…. the implant is cooler and has shown better results. We’ve had rehabilitation in Echo Foundation and Kajetany, both doctors said they saw difference in Hela’s behavior, but weren’t able to mention anything more specific. We’ve exchanged the FM package in Medel for the kids’ version, with safety pin and cable so we could pin the processor to the clothes, Putting on and taking the processor off is very bothersome ? it keeps falling off in the baby carriage, child’s chair and car safety seat. Hela often kept grabbing the coil and putting it into her mouth, she already broke one of them ? we wanted a warranty repair, we were waiting for the decision if they would accept the claim, because it was the child who chew it and broke. We’ve had an idea to insure the processor. Only one insurance company agreed to do it and we’ve just signed the papers. Hela is still a small child and it is hard to explain to her that she should take care of her ?ear?. The coil’s not working ? they gave us a spare one in Medel and sent the broken one to the producer. Fortunately they accepted the claim, we’ve insured the whole implant, just in case. Ever since then, Hela has almost never put the coil in her mouth. 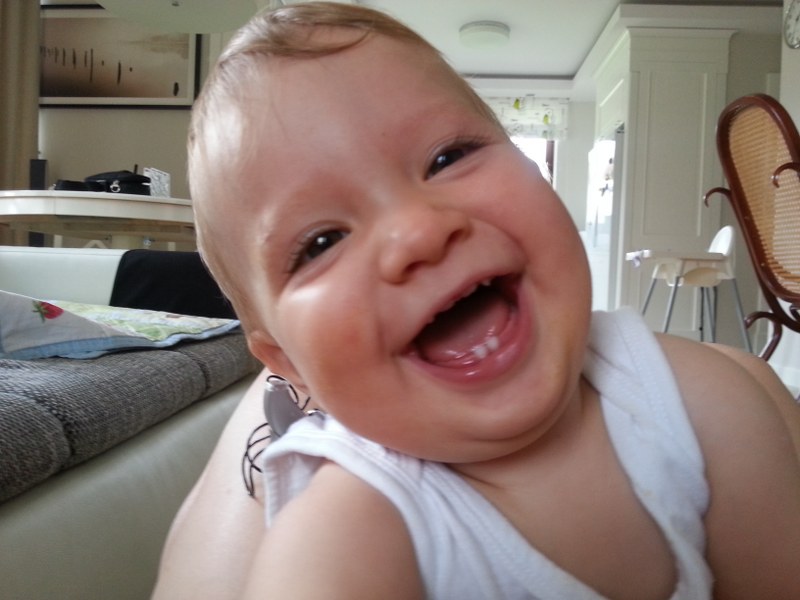 (Institute’s for the Deaf rehabilitation camp)

Four of us went there ? me, Dominik, Agata and Hela. The trip was very successful even though at the beginnig we wanted to return quickly. Everything was organized very well, we’ve got a hut with bathroom and two bedrooms. Full board (breakfast, lunch and dinner) everyday. The activities and meetings were scheduled for all our entire stay there. Individual training with personal speech therapist every day, presentation of interesting topics like bobomigi (sign language for the youngest children), hearing aids and many more every two days. There were some hearing families in the camp, some were deaf. The trip allowed us to see that people with hearing disabilities could live normal lives and function normally. It was worth coming there even though Hela was small and sometimes it was quite tiring. Most people who were at the camp were Institute’s beneficiaries, who attended the Institute’s kindergartenwhere the main language is the sign language. Everyone was really into learning sign language and sending kids into deaf children’s preschool. It startled me a little, because the camp changed my way of thinking and I started to think that way too ? I was even able to consider moving, so Hela could attend that school and could feel that other children are exactly like her… and to learn sign language. After the camp I was determined to move. But Dominik tried to  convince me that we have to wait, there’s a whole lot of implanted children who attend normal preschools and schools and they do just fine ? but I wasn’t really convinced by those words…

I have really fond memories of the psychological classes, they were really great, conducted by a deaf person who was very neutral towards everyone and didn’t judge anybody. We were presented with interesting educational methods, the teacher told us about feelings of deaf children, very often recalling her own childhood memories. It was an awesome experience, the very best of what happened at the camp, it’s hard to describe it with worlds. Too bad there weren’t more classes like this, I would gladly attend them too. During our stay we were constantly talking with everybody about the second implant and most people were against it, but we were more and more convinced to get it. Despite the opinions of many specialists present at the camp we believed it’s worth to make another brain hemisphere catch sound and it’s very important for correct child development to make the child hear with both ears. The Institute’s specialists asked as why second implant if the first one makes her hear… 1